Real-life caveman with a 800-year-old cave into his dream home.

You might be tired among the pressures of modern life sometimes. I guess that most of us have probably dreamt at one time or another of fleeing to the hills.

I think that nothing is impossible when you want to fulfill a dream. A lot of people will tell you that you can’t do it, that you don’t have what it takes, but if it is in your heart and you feel it, there is nothing that will stop you. It is like the sun – you can’t block it: it will shine regardless, if that is what you want.

Motivational Quotes That Will Inspire Your Spiritual Health.

What Makes A Man- 50 Inspirational Quotes That Makes Great Men…

And I will tell you the story like that. I do hope this might be help someone who loss your light, you are in darkness moment or keep going on your dream…

There is nothing impossible to him who will try…

A real-life caveman Angelo Mastropietro has made his hermit dream a reality – by spending over £160,000 turning a 250 million-year-old cave in the Wyre Forest into his dream home.

This secluded hand sculpted retreat has been occupied for 800 years and was featured on Channel 4’s ‘Grand Designs’ presented by Kevin McCloud. Britain’s First 21st Century Luxury Cave House, The perfect staycation away from the modern world where you travel back in time for a totally rejuvenating cave stay experience.

The completed house’s features are anything but stone age – it even has WiFi!

The ambitious makeover captured the imagination of viewers when it was featured on Channel 4’s Grand Designs in September.

Angelo Mastropietro, the 38-year-old, originally from Worcestershire, was living a high-flying life as the head of a successful recruitment company in Australia.

He spent nine months single-handedly transforming the 800-year-old hobbit hole in the Wyre Forest into a 21st century man cave, complete with running water, underfloor heating and even wi-fi.

He was diagnosed with multiple sclerosis and led to him being temporarily paralyzed. He made questions about the lifestyle that he was living with full of stress unhealthy lifestyle that came along with it. That inspired him to seek a simpler life.

Sooner he started his project about his man cave which is super modern located in Worcestershire county. It was no surprise that he made an astonishing cave like this as his last name means ‘Master of the Stone’ that is probably in his blood. This cave reportedly inspired Tolkien while he was writing Lord of the Rings.

“The rock house kinda came along, you know without a shadow of a doubt. I was passionate about that as I was setting up my company.” says Angelo.

LORD OF THE RINGS STYLE

He then set about carving, cutting and drilling into the sandstone hillside – including excavating 70 tonnes of stone by hand – to make his dream a reality. He also had to spend a lot of hours working on the house, to make this cave his dream house.

“In the end, I spent somewhere around 1000 hours basically breaking rocks, cutting rocks, burrowing rocks. You know to total around 70 or 80 tons of rubble that I excavated out of this rock house by hand, and real proof of that is the whole of the terrace outside, is literally 100 square meters of terrace out there. None of that was there when I started .”

Antony explains how he had to do the work himself in his man cave. Although the cave was initially built as a holiday let, Angelo still harbors the ambition of one day living full time in his unusual property. That’s really incredible!

Describing the project on tonight’s episode of Grand Designs, Angelo Mastropietro said: ‘MS was triggered by health and lifestyle and that was the catalyst I needed to remind me that I needed to be mindful of my health and be respectful of my lifestyle. I wanted to be in a place where I had a happier and healthier life.

‘It’s in a beautiful location, it’s uplifting, it makes you feel good, it’s very relaxing. While you are a mile from the nearest pub or supermarket, you’re a thousand miles back in history.’

Incredibly, while he was flicking, he noticed the very same cave was up for sale for £62,000. Then, with a budget of just £100,000, he began tireless work to excavate the cave before cutting and drilling into the hillside to create his woodland retreat. 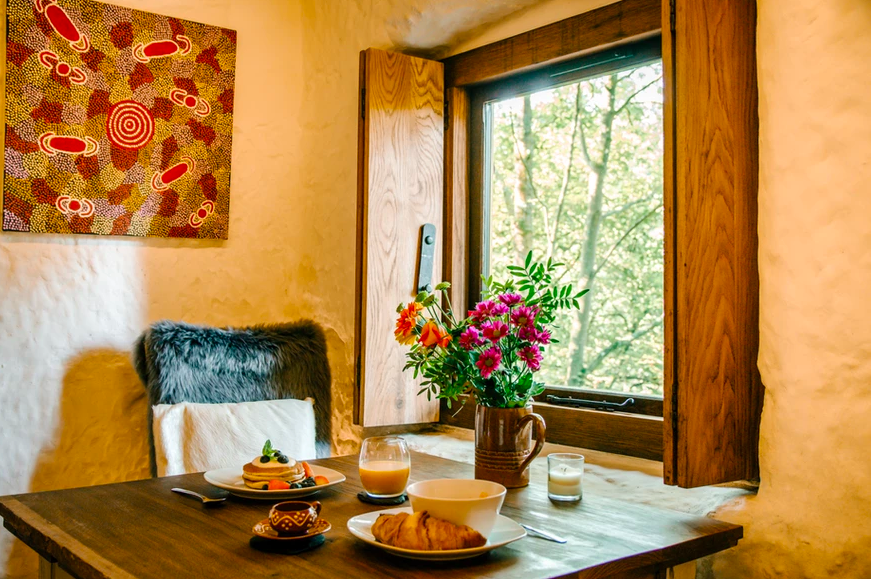 Angelo Mastropietro did not need planning permission and had no guidance of how to convert the space, with the only architect being his fertile imagination.

And, with the constant threat of his illness – which once left him paralysed – the extensive manual labour was a bigger consideration than usual.

‘If I think about it, I do get scared,’ he tells the Channel 4 show. ‘I have literally been paralysed before and it does put the fear of God into you really.’

Last lived in more than seven decades ago, the cave is cut into 50ft high sandstone cliffs in an area which apparently inspired JRR Tolkien to create Middle Earth and its famous fictional creatures.

The cave – which has been in its current four-bedroom form for 300 years – was abandoned in the late 1940s and has been falling into disrepair ever since. It is part of a row of caves considered to be the oldest inhabited rock houses in the whole of Europe – archaeological architects believe it was around in its earliest form nearly 800 years ago.

But although he wanted a calm and peaceful home – and to keep the essence of the cave – Angelo Mastropietro did not shun all the trappings of modern life and instead brought water and electricity to the cave house for the first time.

‘I want to celebrate that it is a cave dwellings, but I want to add modern day luxuries,’ he says. ‘It definitely has a modern feel but hopefully retains some cave charm.’

The completed home has a huge terrace, intimate rooms and white walls to brighten up the cave. He also installed huge glass doors and oak-framed windows to let in the light.

Indeed, I believe that Nothing is impossible, the word itself says ‘I’m possible’!

“If you have a dream, don’t just sit there. Gather courage to believe that you can succeed and leave no stone unturned to make it a reality.”
― Dr Roopleen

Check out our community to update more interesting things https://bitly.com.vn/0tmlyp

Don't have an account?
sign up
Back to
log in
Back to
log in
Choose A Format
Personality quiz
Series of questions that intends to reveal something about the personality
Trivia quiz
Series of questions with right and wrong answers that intends to check knowledge
Poll
Voting to make decisions or determine opinions
Story
Formatted Text with Embeds and Visuals
List
The Classic Internet Listicles
Countdown
The Classic Internet Countdowns
Open List
Submit your own item and vote up for the best submission
Ranked List
Upvote or downvote to decide the best list item
Meme
Upload your own images to make custom memes
Video
Youtube and Vimeo Embeds
Audio
Soundcloud or Mixcloud Embeds
Image
Photo or GIF
Gif
GIF format